The Reason of Attract Customers to 5D Movies Cinema

What is 5D movies?  5D movies in 3D, 4D stereoscopic film, based on the audience from hearing, sight, smell, touch and movement to achieve the 5 position on the ground, simply put, is that the audience can directly ‘Touch’ to the movie objects. 5D cinema through a unique landscape decoration, advanced computer software technology and animation of 3D graphics technology, the role of the audience with a real-time interactive virtual screen movies. When the viewer to wear special glasses to watch a movie special effects, with the change of video content in real time to feel the storm, lightning, falls, bumps, rain, shock, spray mist and other three-dimensional images with the corresponding event, the seat will followed by shaking swing. 5D long movie is currently available in the market generally 8-15 minutes, some of the major highlights of the film.
According to the plot is designed to smoke, rain, optoelectronics, odor, character performances and other effects, so that the audience watching stereoscopic movies, video content with the changes, the new entertainment experience on the visual and physical experience, like the proximity to its environment, exciting. It evolved from the traditional three-dimensional cinema, with a prominent theme, high tech, lifelike picture impact resistance and other characteristics. This theater was originally located mainly in theme parks, science places where relatively small coverage.
5D cinema is now developing rapidly and why this? Entire 3D industry becomes hot, 4D cinema, 5D cinema and other related industries are also rising. 5D cinema in fact can not be regarded as something new, it is based on 4D stereoscopic film, plus environmental effects simulation, introduced with a water jet, vibration, and other functions leg sweep 5D seat. 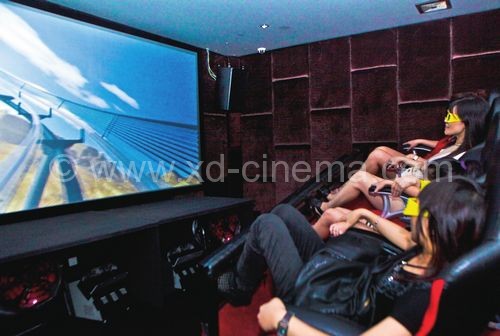