What is 5D movie ? After reading audience feel it ! !

1 . Lightning: When filming , thunder and lightning , a theater hall will issue a dazzling lightning, accompanied by the roar of lightning , thunderstorm days in the audience think .

2 . Rain: When it rains movie pictures , showing the slightest fear of sparking Epiphyllum hall , which is mounted on the spray device controlled by computer to complete the hall , the audience will feel the real rain falling from the sky , moist his hair and cheeks .

3 . Snow: simulation. Snowflake function is efficiently and quickly take action to artificial snow snow Feifei triumphantly sky drift of the screen from top to bottom . Snow on the screen and indoor snow mixed together, suddenly exposed to the audience, he will be wrapped in silver makeup Su ‘s world .

4 . Smoke : Analog burning cigarette. Imitate the burning smoke , smoke appears along with “flame” , as if the sky is burning. Analog curls between fog cloud Piaowu audience .

5. Foam: Foam filled generate realistic . Explore the underwater world and underwater divers , aquatic plants and animals due to the role of metabolism , will spit bubbles blowing bubbles from the bubble machine drift theaters , and alienation between the audience , so that every corner of the theater theater mystery lively atmosphere .

6. Heat fall : Analog bloody scenes of nature law of the jungle , or excreta . A bird flying over their heads in front of you, and discharge ; ancient battlefield , military playground , blood spatter , etc. Since lens occurs , 40 constant temperature hot water in the form of large droplets splashed down in the audience , who can get unexpected effect.

7 . Vibration : Analog impact. When the movie screen , an object lens and lens impact or landing such scenarios , the instantaneous seat vibration make the audience feel as if in a virtual reality.

8. Spray : 5D movie Crazy , Gao buy sold out quickly, water, jet expansion : the seat is equipped with fog, gas nozzle . Generally, in parallel, can be used alone. This seat can be sprayed on the expansion into a different water spray and different gases.

9. Wind: hair behind your ears, the audience can feel the authenticity of the three-dimensional position and stimulating environment .

10. Sound: Stereo speakers seatback , especially the condition sounds , the audience can almost feel the stimulation of special effects , as if something in your mind , you want to attack . 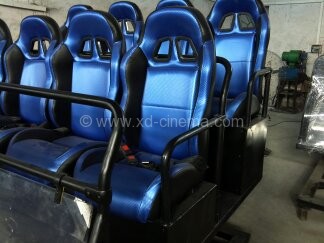